Protocol Amending AJCEP Comes Into Effect: What It Means for Investors in Vietnam

Protocol Amending AJCEP Comes Into Effect: What It Means for Investors in Vietnam

Share:
comment
On August 1st, 2020, the first protocol to amend the ASEAN-Japan Comprehensive Economic Partnership (AJCEP) between Japan and five members of the Association of Southeast Asian Nations (ASEAN), consisting of Laos, Myanmar, Singapore, Thailand, and Vietnam came into effect.

The AJCEP came into force in December 2008 and covers trade in goods and services, investment, and economic cooperation. 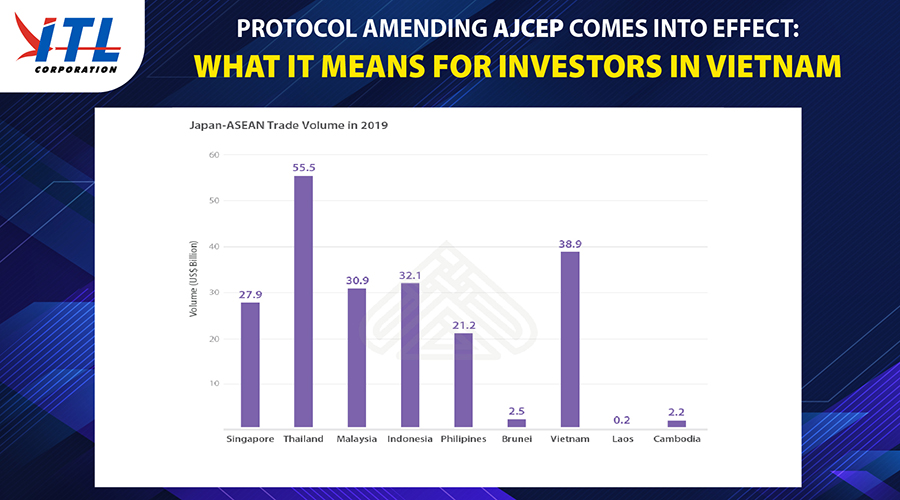 The protocol adds provisions concerning trade in services, movement of business people and investments, and is expected to strengthen reciprocal economic ties in wide-ranging fields between Japan and ASEAN countries.

On August 1, 2020, the first protocol to amend the ASEAN-Japan Comprehensive Economic Partnership (AJCEP) between Japan and five members of the Association of Southeast Asian Nations (ASEAN) went into effect.

While the AJCEP was first implemented in December 2008, the first protocol amending the FTA will promote further trade and investment between Japan, Laos, Myanmar, Singapore, Thailand, and Vietnam.

To understand its implications for businesses and investment opportunities in Vietnam, Vietnam Briefing will discuss major changes of the new protocol.

The AJCEP was Japan’s first multilateral free trade agreement (FTA), which is based on the bilateral Economic Partnership Agreements (EPAs). EPAs are agreements signed by two or more countries designed to create a free trade area involving reciprocal economic integration and participation.

Prior to this, Vietnam and Japan had also signed an EPA named the Vietnam – Japan Economic Partnership Agreement  (VJEPA), which gives more preferences to bilateral trade and investments than under the AJCEP. The two FTAs can coexist, and businesses can choose to apply the more favorable depending on their operation.

The first protocol to amend the AJCEP assumes special relevance for three countries that do not have bilateral FTAs with Japan, namely Laos, Myanmar, and Cambodia. Further, it also includes new rules and liberalization commitments from ASEAN countries that are not included in their bilateral EPAs and related agreements.

According to the Japan External Trade Organization (JETRO), ASEAN was Japan’s third-largest trading after China (including Hong Kong), and the US. In 2019, trade volume between Japan and the bloc reached US$214 billion, with Japan posting a trade deficit of US$2 billion.

Japan is also attracted by ASEAN’s growing market potential and openness. In the past five years, Japanese investors allocated an average US$20 billion per year into the region.

As of 2019, there were more than 13,000 Japanese companies operating in Southeast Asia, and more than 200,000 Japanese citizens living and working in the region. A survey by the Japan Bank for International Cooperation (JBIC) in 2019 revealed that more than 56 percent of Japanese firms were looking to expand their business in ASEAN countries in the coming years, particularly Vietnam, Indonesia, and Thailand.

The Japanese government has also recommended Japanese businesses from diversifying their supply chains to ASEAN to cope with the on-going US-China trade war, the Japan-China territorial dispute, and the COVID-19 pandemic.

To this effect, the Japanese government in April issued a US$2.4 billion economic support fund to help finance Japanese businesses that bring manufacturing back to Japan or look at other countries in Southeast Asia.

What this protocol means for Vietnam
Japan has been one of Vietnam’s top trading partners, investment sources, and foreign aid providers. In recent years, Vietnam has emerged as an attractive investment destination and supply chain relocation option for Japanese enterprises.

According to JETRO, 64 percent of Japanese businesses plan to expand their current operation in Vietnam, and 43 percent of responders said Vietnam was their first relocation choice.

In this context, the protocol aims at promoting, facilitating, and protecting Japanese trade and investment opportunities in ASEAN countries, including Vietnam. Similarly, Vietnam also made major commitments to allow market access, relax rules on commercial presence and the movement of natural persons for a number of industries and services, in order to attract more investment and reap trade opportunities from Japan.

Vietnam is scheduled to completely remove restrictions on the cross-border supply of a majority of services, including legal, accounting and auditing, taxation, engineer and integrated engineer, medical and dental, computer and related services, R&D activities in natural science, market research and management consulting, education, advertising services, and so on.

Besides, Vietnam also allows the presence of foreign entities in most of the aforementioned services, with some exceptions and specific regulations for services such as engineering, medical and dental, and incidental agriculture and manufacturing services.

For example, the protocol allows the establishment of 100 percent foreign-invested hospital with a minimum capital of US$20 million and also allows foreign enterprises from Japan and other members of the AJCEP to conduct business in engineering services.

The movement of natural persons refers to citizens and permanent residents from any members of the AJCEP that move abroad in order to provide a commercial service. In this protocol, Vietnam has granted a 90-day period stay for service salespersons, business persons responsible for setting up a commercial presence in Vietnam, and other foreign contractual service suppliers.

Intra-corporate transferees (managers, executives, and specialists) of foreign firms with a commercial presence in Vietnam will be granted entry and a stay permit for an initial period of three years. This may be extended, subject to the term of operation of those entities in Vietnam.

On the Japanese side, Vietnamese businesspeople can now avail of either a short-term or long-term business and investor visas. Professionals of certain fields such as legal, accounting, tax, and service suppliers that qualify can stay in Japan for up to five years. This is also extendable to their spouse and children.

The protocol enables ASEAN and Japan to share the large resources available through joint collaboration to further promote the growth of both the manufacturing and service industries. Intra-party traders can also enjoy a larger sourcing base. For example, they can use raw or intermediate materials from any AJCEP members to enjoy preferential tariffs.

The amended agreement is also beneficial to Japan, as it makes it easier for Japanese companies, especially in the services sectors to establish bases in different ASEAN countries, including Vietnam, and move components and products across borders as if it were a transnational assembly chain.

For Vietnam, the AJCEP provides additional benefits in terms of immediate and accelerated elimination of duties for products and services that were not included under the VJEPA.
Source: vietnam-briefing
Share: